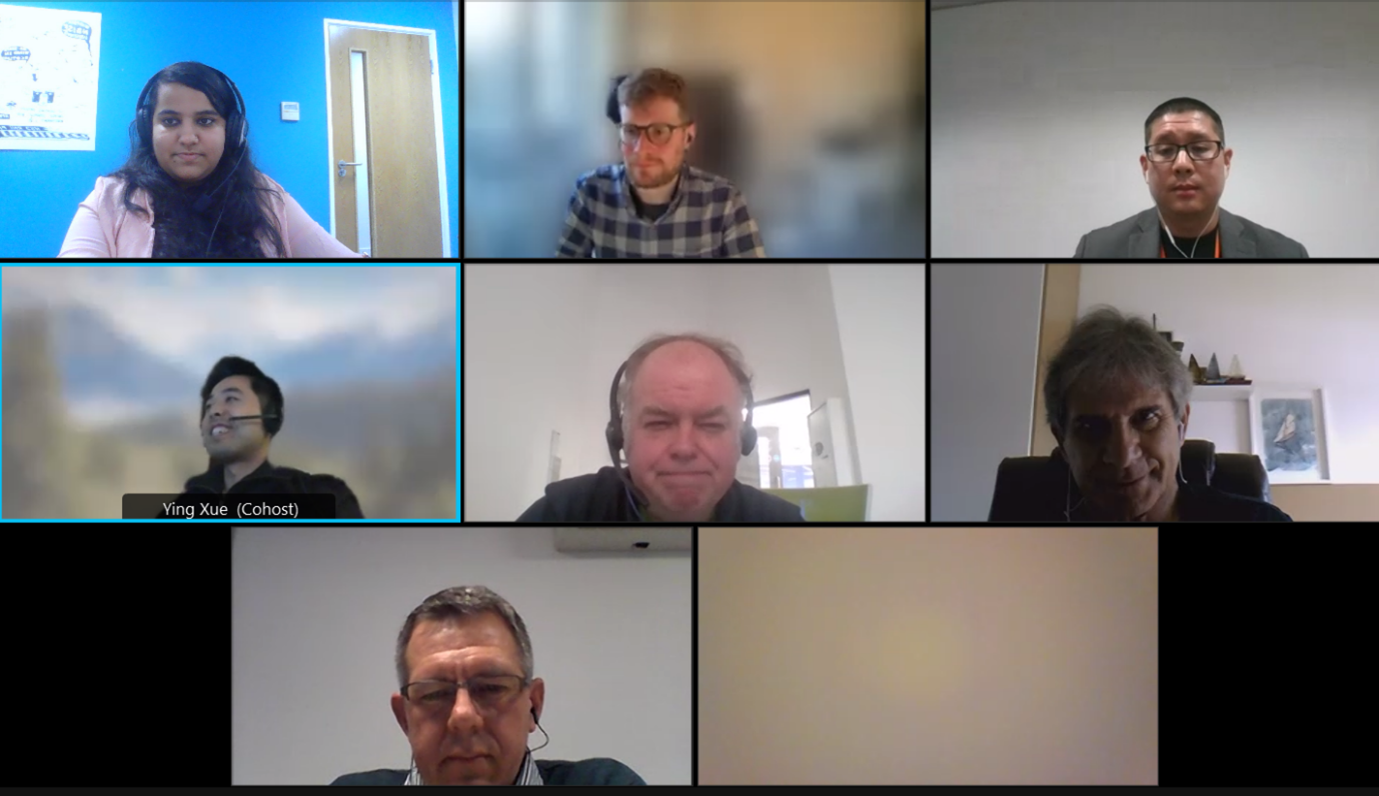 On 3rd December 2021, CIGRE UK NGN and Study Committee B4 organised an online webinar on Grid Forming Technologies for the Net Zero Power Network. Two speakers were invited, including Dr. Agustí Egea-Àlvarez from the University of Strathclyde and Ben Marshall from National HVDC Centre. The webinar was chaired by Dr. Dechao Kong from National Grid ESO, 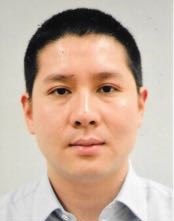 Dechao Kong is the elected UK Regular Member of CIGRE B4 Study Committee since August 2020. He is currently a Power System Engineer and the Subject-Matter Expert in DC Systems and Power Electronics in National Grid ESO, UK. Dechao has been getting heavily involved in the UK’s academia and industry since 2008, contributing his such subject-matter expertise in technical strategy & policy development, new technology & innovation, engineering and asset management in the areas of DC Systems and Power Electronics. Dechao obtained his Ph.D. degree in Electrical Engineering from the University of Birmingham, UK. He is a Chartered Engineer and an IET member in the UK. He is also an active member with multiple roles in several CIGRE SC B4 & B5 Working Groups. 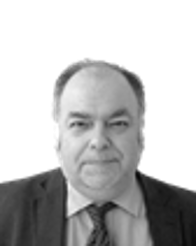 Ben Marshall oversees the team of Simulation Engineers undertaking detailed HVDC simulation studies in real-time using vendor-supplied replica hardware, to understand multi-infeed, multi-terminal and multi-vendor HVDC operation and interactions, for real schemes in GB; interpreting the results to gain insights to improve the design and operation of HVDC schemes.  Ben previously has had a 23 year long and varied career within National Grid with a broad range of experience, particularly with respect to the analysis of the operation and design of the AC and DC transmission systems. He has experience in both offline and realtime EMT simulation and in modelling of convertors across battery, solar wind and HVDC systems, He has developed deep technical skills relating to dynamic stability of power systems and the performance specification of HVDC convertors. Within the ESO, Ben advised on the specification, validation and modelling of new HVDC connections, supporting the compliance connection planning and requirements and provided technical leadership on AC and DC control systems, System Operability, Smart Grids and power system simulation; leading complex power system studies. 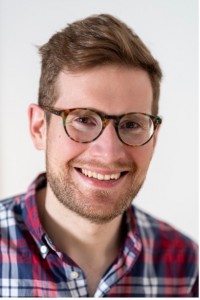 Dr Agustí Egea-Àlvarez has been a Senior Lecturer at the electronic & electrical engineering department of the University of Strathclyde since 2018. He obtained his BSc, MSc and PhD from the Technical University of Catalonia in Barcelona in 2008, 2010 and 2014 respectively.  In 2015 he was a Marie Curie fellow in the China Electric Power Research Institute (CEPRI). In 2016 he joined Siemens Gamesa as converter control engineer working on grid forming controllers and alternative HVDC schemes for offshore wind farms until 2018. His research interest are: control of grid-connected converters control, hybrid AC/DC networks modelling and control and advanced converter topologies for grid-connected applications.   He is a member of IEEE, IET and has been involved in several CIGRE and ENTSO-E working groups.

At the start of the event, Dechao provided an opening remark and welcomed all the attendees, took us through the agenda planned for the day and gave us a brief overview of the event. 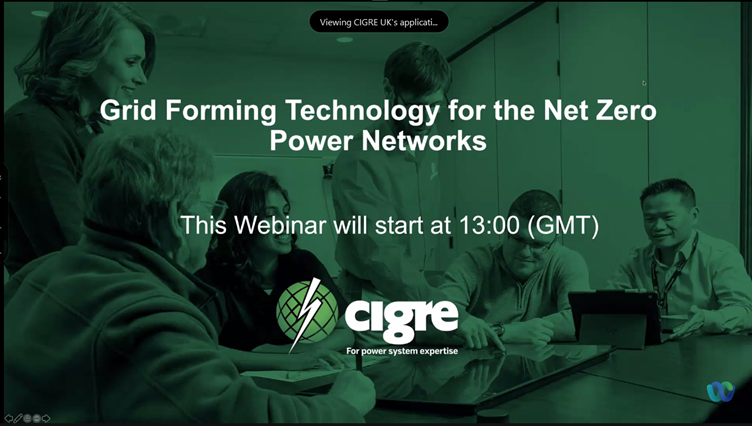 Siva Kaviya briefly introduced the CIGRE UK NGN and its past events. 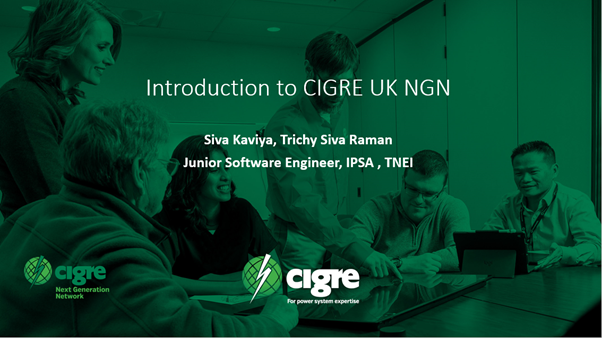 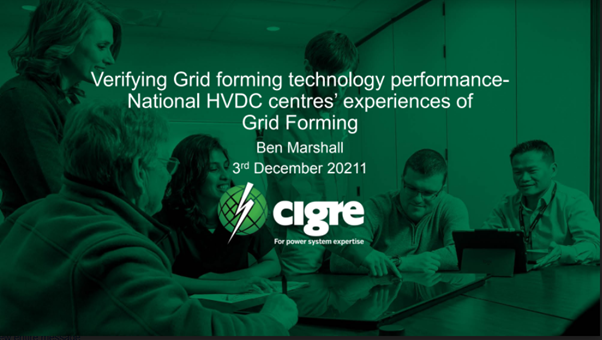 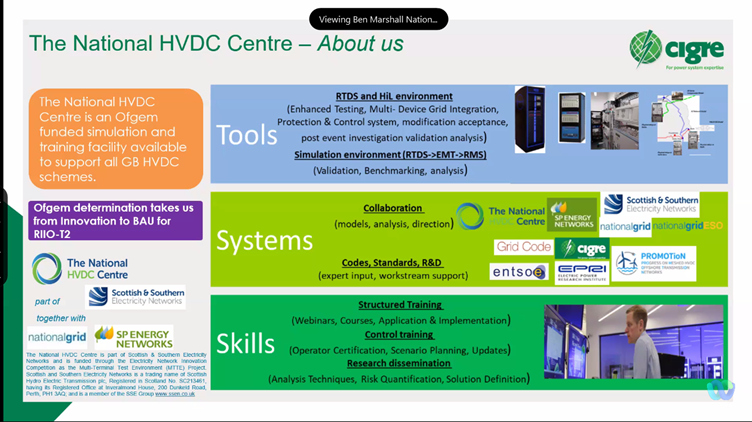 Ben Marshall, gave a brief introduction about himself, kicked off the presentation by taking an overview of what the National HVDC centre is all about, by touching upon the tools, systems, and skills that’s in place.

Next, He took us through the definition of grid forming technologies and their applications in the case of Islanded system support, black start, remote inertia support and GB-Grid forming stability support.

He further spoke about the different grid forming converters with their analysis path such as offline classical RMS analysis, scanning studies, offline EMT studies and real-time EMT (CHIL) studies and also discussed in detail the test bench which is in use for the same.

Furthermore, he took us through the schema and tests that is used for software in the loop setup and the verification stages that is involved in model performance such as design stage, factory acceptance test, commissioning phase test injections and in service delivery phases, supported it with an example of RTDS-CHIL using CMS example. 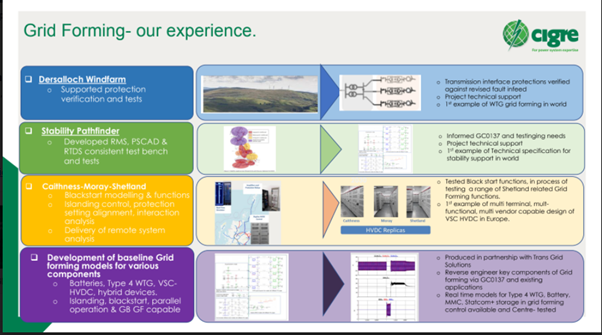 He also enlightened us with his experience of the grid forming in the projects such as Dersalloch Windfarm, stability pathfinder, Caithness-Moray-Shetland and development of baseline grid forming models for various components. 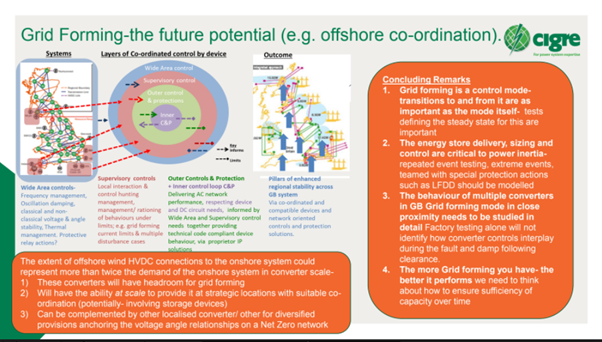 He concluded his presentation by stating that the grid forming has the potential to unlock the future such as offshore coordination. 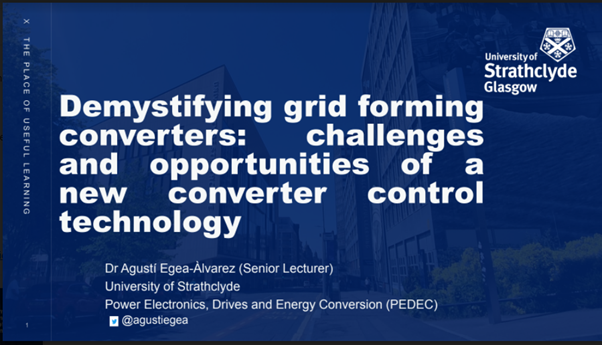 Dr Agustí Egea-Àlvarez, gave a brief introduction about himself, followed by giving us an overview of the need for transition in control due to increasing interventions of power electronics and need to update the grid code compliance. He then touched upon the challenges in GB network for the same such as frequency stability issues, voltage stability issues, system strength issues and other issues.

He further answered the question is grid forming a silver bullet? by taking us through what exactly grid is forming, challenges involved, limitations present in an existing grid forming technologies such as virtual synchronous machines, current control based grid forming(droops) or synchronverters and stated that the grid forming controls should align to the objective of the operation to ensure most optimal and cost-effective solutions. 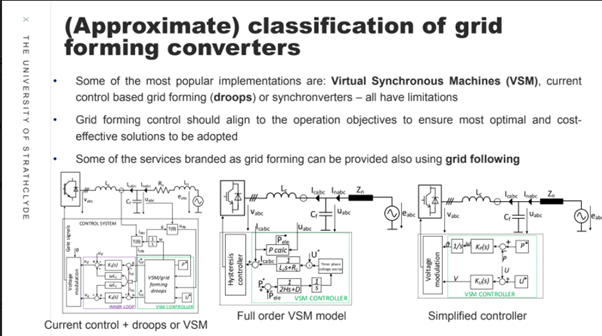 Next, He introduced the different classifications of the grid forming converters such as current control+ droops+ VSM, Full order VSM model and simplified controllers.

He further explained in detail the challenges involved in a grid forming technologies such as TRL level and regulation, energy storage requirements, measurements of inertia response, control interactions, small-signal stability and fault ride-through of VSM converters.

Furthermore, he enlightened us about various projects that have utilised the grid forming technologies such as testing of grid forming capabilities, assessment of grid forming services for offshore wind OFTO, both of which are national grid ESO projects. 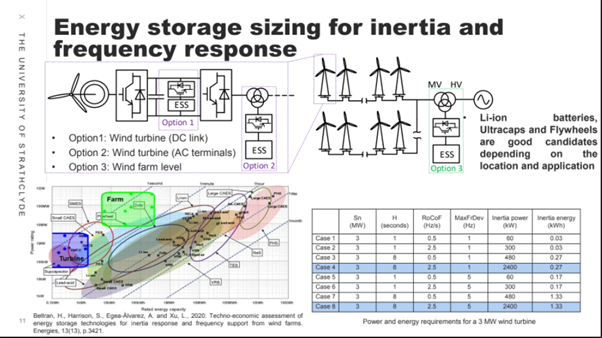 He concluded his presentation by giving some more projects that utilised grid forming technologies such as energy storage sizing for inertia and frequency response, measuring inertia response from a wind turbine, Interaction between converters, the interaction between GF & internal wind turbine drivetrain, and control and fault ride-through strategies for grid forming converters without current loop.

During the panel discussion, the two presenters took several questions such as how to decide the converters for the grid forming technologies.

We would like to take this opportunity to thank, especially all speakers, the organising committee and all the attendees who joined this event on Grid Forming Technologies for the Net Zero Power Network, marking it the second successful collaboration event CIGRE B4 & CIGRE UK NGN and made it successful.