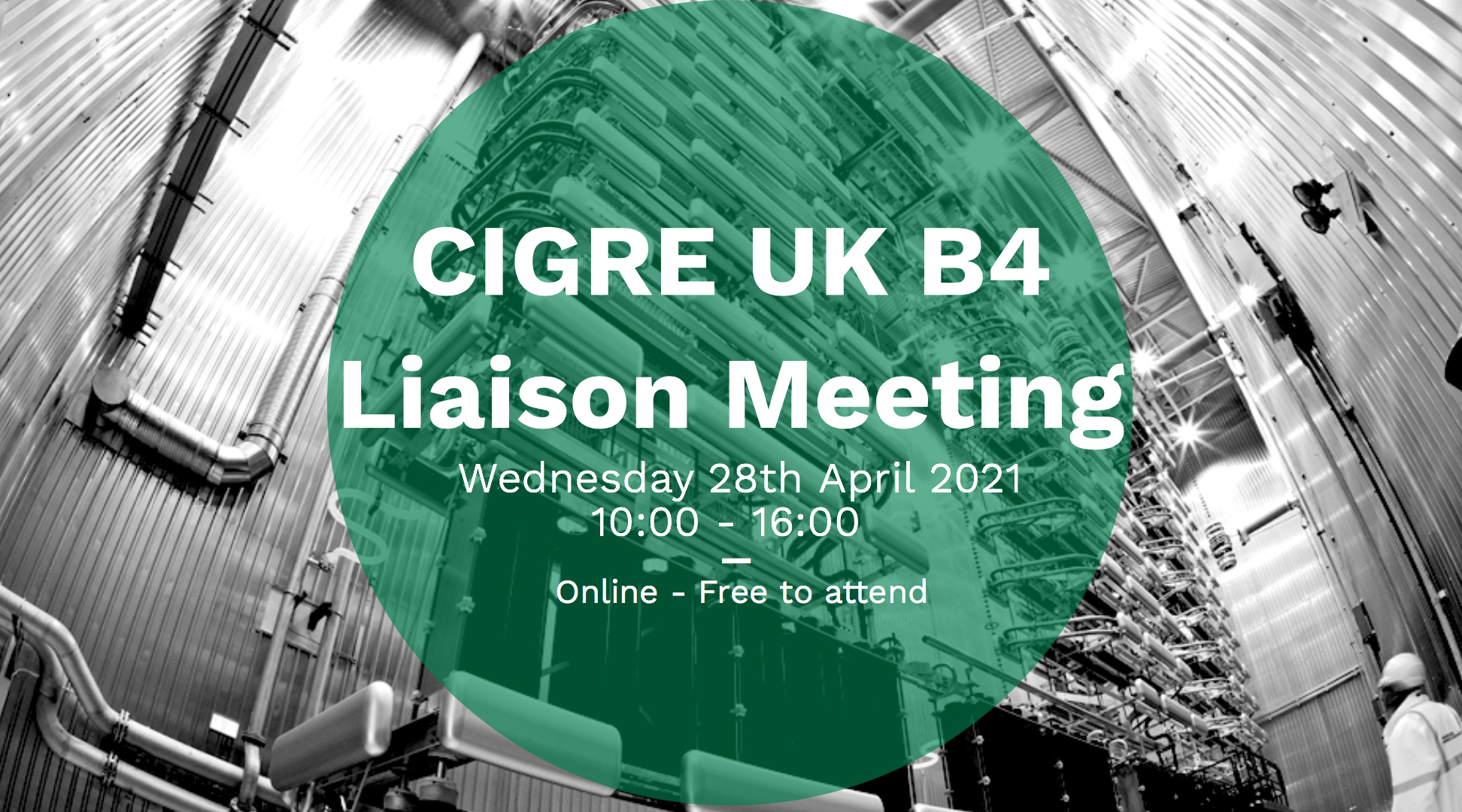 The purpose of the meeting is to provide a high-level overview of the ongoing activities in CIGRE related to Study Committees B4 (DC Systems & Power Electronics) led by UK Regular Member Dechao Kong. Technical Brochures published in the last year will be highlighted, along with a status update on all of the active Working Groups where the UK has an interest. You will also hear about the latest new work items approved by the Study Committees during the Paris e-session, and to provide feedback on possible future work items that could be proposed in the future.

TO REGISTER FOR THIS EVENT 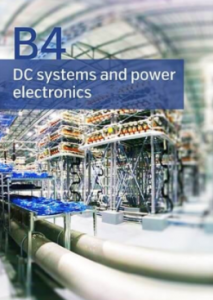 Within its technical field of activity, Study Committee B4 addresses topics throughout the asset management life-cycle phases; from conception, through research, development, design, production, deployment, operation, and end-of life. At all stages, technical, safety, economic, environmental and social aspects are addressed as well as interactions with, and integration into, the evolving power system and the environment. All aspects of performance, specification, testing and the application of testing techniques are within scope, with a specific focus on the impact of changing interactions and demands due to evolution of the power system. Life cycle assessment techniques, risk management techniques, education and training are also important aspects.

Within this framework additional specific areas of attention include:

13:15 – 13:55– DC-DC Converters in HVDC Grids and for Connections to HVDC Systems | Dragan Jovcic, WG B4.76 Convenor, University of Aberdeen 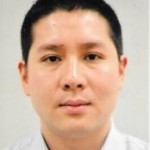 Dechao Kong
is the elected UK Regular Member of CIGRE B4 Study Committee since August 2020. He is currently a Power System Engineer and the Subject-Matter Expert in DC Systems and Power Electronics in National Grid ESO, UK.

Dechao has been getting heavily involved in the UK’s academia and industry for DC systems and Power Electronics since 2008, contributing his such subject-matter expertise in technical strategy & policy development, new technology & innovation, engineering and asset management.

Dechao obtained his Ph.D. degree in Electrical Engineering from University of Birmingham, UK. He is a Chartered Engineer and an IET member in the UK. He is also an active member with multiple roles in several CIGRE SC B4 & B5 Working Groups. 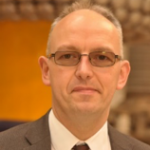 Carl Barkerholds a B.Eng. from Staffordshire Polytechnic and a M.Sc. from Bath University in the UK.  He joined GE’s Grid Solutions in Stafford, UK in 1989, initially working on the design and development of individual HVDC and SVC projects then becoming System Design Manager, responsible for all technical aspects of HVDC projects.  He is, at present, a Consulting Engineer within the business providing technical support across many activities.

Carl is a Chartered Engineer in the UK and a member of the IET (UK), a Senior Member of the IEEE, a distinguished Member of CIGRE B4, a visiting lecturer at Birmingham University and an honorary visiting professor at Cardiff University.

Harry Evansis consultant electrical engineer working within GHD’s Energy team. During his time at the company, he has worked on a range of projects covering; Asset management and replacement of major plant and cable systems; power systems modelling of generation connections; co-authoring a review into emerging transmission technologies; and SMART grid design of distribution networks. His other experience includes being recently selected as one of the winners of the CIGRE NGN Young Member (YM) Presentation Showcase and a continuing role as a contributing member to CIGRE WG B4.89. 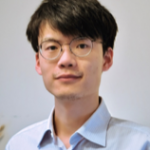 Mingyu hold a Ph.D. degree in Electrical Engineering from the University of Manchester. He is an NGN member of CIGRE and actively participates in WG B4.90. In addition to his activities in CIGRE, he is a Member of the IEEE and IET and has served as reviewers for a number of international scientific journals. 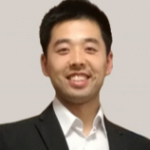 He is currently the chair of CIGRE UK NGN and an Assistant Professor in Electrical Power Networks in the University of Birmingham. He has a strong research interest in HVDC technologies.

Prof. Jovcic is a member of CIGRE, chairman of WG B4.76 and has been member of 4 other working groups. He is founder and director of Aberdeen HVDC research centre where he has managed externally funded research projects of around £4 million. Prof Jovcic has over 120 publications and he is author of a book on HVDC: “High Voltage Direct Current Transmission: Converters, Systems and DC Grids”, Wiley, 2015. 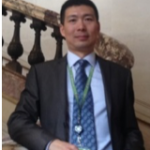 James Yu (MBE PhD CEng FIET)is a Chartered Engineer, an elected IET (Institute of Engineering and Technology) Fellow and a Royal Engineering Academy Visiting Professor. He is the convenor of CIGRE JWG C6/B4.37. James is also the deputy UK Regular Member of CIGRE B4 SC.

James joined the UK electricity transmission/distribution industry after he finished his studies from Newcastle upon Tyne. He has taken various technical, commercial and managerial roles in the industry. James is currently accountable for the innovation projects delivery at SP Energy Networks. His team are working on flagship innovation projects at national and European levels, and pushing the innovation into business.

James is passionate about education and fully aware of its profound impact on young people’s future. James has strong commitment in the engineering higher education in the UK. He is a Ph.D. Supervisor and visiting professor at various institutes, including Glasgow University, University of Newcastle upon Tyne and the University of Manchester. James published over 50 academic papers covering electricity market, transmission network control, renewable generation and engineering education. 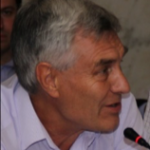 NigelShoregraduated from the University of Edinburgh in 1973, then completed his Ph.D. at Imperial College, London, in 1976. After several years with UK consultants as a power system analyst, he moved to Brazil to work on the Itaipu HVDC project, first for Promon Engenharia then ASEA. His positions included main circuit design, control group manager, site commissioning manager and system test co-ordinator.

From 1986-1989 Dr. Shore was a design engineer in ASEA/ABB Sweden, engaged on harmonic analysis and filter design. In 1989, he relocated to England to work remotely for ABB HVDC in Ludvika. Since then he has been responsible for harmonic studies and filter design in very many of ABB’s HVDC projects and tenders, along with developing software tools and design methodologies, and mentoring. He is at present a consultant for Hitachi ABB Power Grids.

Dr. Shore has been active in IEEE and IEC, and within CIGRE he has participated in eight completed Working Groups, four of which as Convenor, and is the Convenor of the new WG C4.63 on harmonic standards. He received the CIGRE Technical Committee Award in 2014. He is a Senior Member of IEEE, a Member of the IET and a Distinguished Member of CIGRE.